Notes on a Story-Collector: An Interview with Administrative Coordinator James Wheeler
May 13, 2021 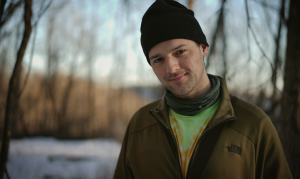 The first thing you’ll notice about James Wheeler is the look of serenity and focus in his eyes. He commutes to Viroqua from La Crosse almost daily, usually donning shades of olive green, a strand of bodhi beads on his wrist and a backpack brimming with countless projects and tasks he hopes to work on that day. Despite the long hours he spends in the car, he enjoys the quiet opportunity his commute provides to listen to audiobooks. James describes himself as a spontaneous person who loves seeking new adventures and meeting new people. A wise character in his life has described him as a “story-collector”—a person who wants to understand the people around him and cherish what he learns.

“Throughout a lot of my life, I’ve been underwhelmed,” James told me when describing how he arrived here at Thoreau College. After serving in the United States Military and graduating from the University of Wisconsin, La Crosse with a degree in communication, James has worked a wide range of jobs that never fully clicked for him. He has often found himself asking, “What am I doing here?” For the four years leading up to the pandemic, James found meaningful work in a job with the Ho Chunk Nation in La Crosse, but as with so many other folks, COVID put James in a position of needing to find something new. He took the time to practice self-reflection through “connecting with the earth and the spirit.”

When James stumbled upon an ad for the position at Thoreau College, his first thought was, “Is this a real thing?” The Administrative Coordinator position, it seemed, would give him an opportunity to be part of a small community, learn more about regenerative agriculture, and put his wide range of acquired skills to real use. After writing what he described as an “honest, straightforward response” to the job search, he was hired by Thoreau College and since passed up another job offer: “I could tell after being here a week or two that [Thoreau College] was something completely new.”

Since his arrival to Thoreau College, James has worked closely with Jacob Hundt on outreach, fundraising, grant writing, policy development, and program design. He has had an amazing time experiencing the Driftless land, connecting with interesting people, and discussing works of literature and philosophy. He works tirelessly to develop and steward this program he has already grown to care about so much. James plans on pursuing a graduate degree in mental health counseling through Viterbo University starting this spring. We are honored that he has choses to share this chapter in his story-collection with us. Welcome to the city of abundant life, James!